Today my sweet little Kennedy is 8 Months old! Can you believe it?! Look at those teeth!!! 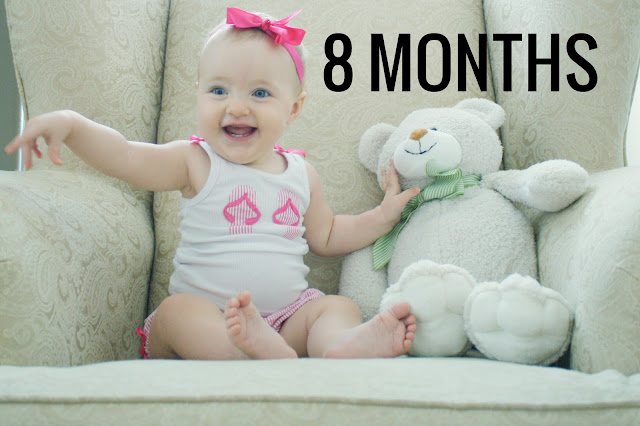 KENNEDY LATELY:
– We have hit a lot of milestones between seven and eight months, and she is just blossoming and has the most wonderful personality to go along with it!
– When we were on Cape Cod, Kennedy sprouted a tooth randomly one day. She didn’t even fuss. Then the next day, she had another tooth, and then the next day… another! She has three bottom teeth right now. She was so happy throughout teething. I know this isn’t the end of it, so let’s hope she keeps the good attitude up!
– She is getting really close to crawling. When I sit her down on her bottom, she immediately tries to get in a crawling position. She will reach for items and kind of drag herself around on the floor. I’m okay with her taking a while to do this since I haven’t done a lick of babyproofing!
– Kennedy wears 9-12 month clothes. Crazy!!
– She enjoys sleeping on her side or stomach and will flip around a lot during the night. She also tosses and turns a lot to get settled when going to sleep… it’s kind of cute because her daddy is the same exact way.
– She has started talking and babbling a whole lot more! Kennedy can say “Dadadada” or “Mamamamama” or “Lalalala”.
– She still claps up a storm and she is very into copying what you do.
– Kennedy is a pretty adventurous eater. She will try just about everything we put in front of her. The foodie in me rejoices! I have had fun making purees here at home along with giving her finger foods. I practice a mix of Baby Led Weaning along with some purees to get her used to different tastes, and fill her belly up. I usually try to give her something that we’re eating that is acceptable for her. When we’re at restaurants, she loves chewing on bread or crackers because she feels like she gets to do what we’re doing. If there’s fruit on my plate, she gets some (like melon or blueberries). If there’s avocado on my plate, she gets some. She just tried yogurt for the first time this week and she adores it! I don’t really know a whole lot about baby food – I just give her a lunch and dinner and she nurses still.
– I just adore her personality. She is so much fun! 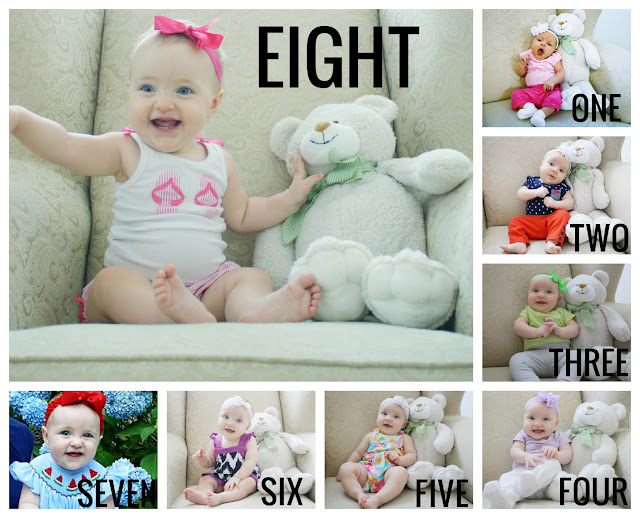 Happy 8 Month birthday, Kennedy! We love you so much!

Too much fun in the sun ☀️

After 5 months of staying home, it feels AMAZING t

Give me a double tap of Facebook ads suck you in.

Let's chat all things drugstore! Go check out my l

Here’s the story of a lovely lady.... plus all h