You are here: Home / Pregnancy / Baby O’s Day of Discovery

I told you I’d blog about all the details on the baby, so here we go!

So, how’d we find out I was preggers?

You know how we went to Charleston? On the flights there and back, I got really bad motion sickness, even puking on the way home. That never happens to me. I thought it must have been a fluke. Later that week, I got a few bad migraines in a row. And I was feeling quite nauseous in the mornings with the migraines, now that I thought of it. Something was off – I normally don’t get that many migraines in a row, although I suffer from migraines every now and then.

Greg and I were texting each other. It’s sort of hilarious to look at now.


Meg: …should I take a pregnancy test?

Meg: I don’t know… just want to cover my bases. I don’t know what is making me so nauseous all the time.

Meg: You’re not mad at me for asking that are you?

Meg: Ok. Just freaking out here a bit. What if I am?!? Eeeeek

Greg: It’s probably not that. I was motion sick this weekend, too. Try taking some excedrin.

Greg: I’m going to pick up a pregnancy test bc this is going to really bother me since you mentioned it.

Needless to say, 6 pregnancy tests later (Greg went back to Walgreens after the first batch showed positive), they all showed positive. We had no idea what to do. I guessed you were supposed to call your OB-GYN. Called them the next day. Got in to see them on Friday the 13th.

They did an ultrasound.

And there it was. 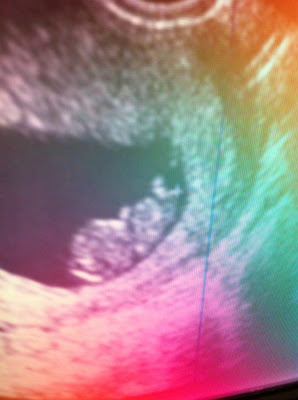 Our baby! Heartbeat and all!
Baby O will be here December 16!
Greg was thrilled! He was so happy and excited! I was completely shell shocked. I couldn’t believe I could actually be a mom. I was so happy but definitely not showing it like Greg was.
Honestly, though- we’re so thrilled. We went out and bought a house the next week to raise Baby O in. And we can’t wait to have a little family of our own.
I also have a feeling that  Dexter will be a fantastic big brother.