I promise this is the final part of the birth story! I know I have been leaving you all on some cliffhangers. Read part one here and part two here.

So, where were we? Right, I was about to push.

The nurses brought in the stuff they needed to get me to start pushing. They set up those stirrup thingies, and even brought in a mirror, in case I wanted to see. I told them not now, and I would ask for it if I wanted it.

They instructed me to take a deep breath, push like I had to poop, holding my breath, and while they counted to ten. I know how to take some deep breaths from diaphragmatic breathing used in singing and acting, so I figured this would be a breeze. With each push, one nurse held one leg, Greg held the other, and the other nurse was down below assessing. The doctor wouldn’t be called in until it was getting close.

The nurses both said I was “doing great” and my pushes were awesome. We, however, find a new development. The baby was face up, which makes for an even more difficult delivery. When a baby is face up, the largest part of the head is subject to coming out first, which can be more traumatic for both mother and baby. It would also take longer for me to deliver her.

Each time a contraction would come on, I would push. I eventually did ask for the mirror. Now, that was something else. Who would have ever thought my lady parts would look like that. I could see her head. But it wasn’t going anywhere!

So, here we are about two hours later. I’ve been pushing with everything I’ve got, yet there has been no progress. Apparently she’s kind of stuck. Then I start running a fever. I am told that we can keep going, but if my fever reaches a certain point, the baby has to automatically be taken to the NICU (newborn intensive care unit) upon delivery. When I heard the word “NICU” I immediately panicked. There was no way I was going to subject my child to injury, fever, and possible infection all because I wanted to deliver her vaginally.

I was given the option to keep pushing, but those odds weren’t looking that good simply because she hadn’t moved much more down the birth canal (plus all of the other things)… or get right in for a c-section. I didn’t hesitate. I would gladly have them gut me like a fish so my baby would be safe. C-section it is. I made the doctor promise to sew me up real tight and make my abs go back to the way they were. She said that I had nothing to worry about because she does one hell of a c-section and she would sew my muscles back (apparently some doctors don’t sew abdominal muscles back together after a c-section – they just stitch up the exterior). And for some reason, I felt at peace. I know c-sections are major abdominal surgery and require more recovery, but I just knew that she was going to do a great job on me.

Now here’s where things get a tad messed up. Apparently there were about 3 other women in line in front of me for c-sections (the hospital was extremely busy that night), so I had to wait. Over two hours. This is where I probably felt the most agonizing pain. Since I had pushed so hard and so effectively, the poor baby was jammed in my pelvis and giving me the most excruciating, extreme pressure. This was far worse than those devil pitocin contractions. Poor Greg was scared for me (although he never showed it) and my mother (who came in to check on me) kept telling them to move faster. My fever was rising, and the clock was ticking to almost 24 hours since my water broke the previous morning. There was nothing the nurse staff could do. I think the anesthesiologist came back in and upped my drugs, but that didn’t provide any relief for me. I was in so much pain. I started shaking uncontrollably. Oh my God, get her out! She is stuck!! Finally, after what seemed like an eternity, it was our turn. Greg suited up in some scrubs and then all of a sudden I was being wheeled out.

It was just like the movies, where the camera angle is on the ceiling and all you see are the fluorescent lights, one after the other. I don’t remember who was there, or if anyone was talking; I just remember those lights. I’m wheeled into the operating room, where there must have been at least fifteen people in there prepping things and hurriedly moving around the room. About 20 million people lifted me and moved me to the operating table, like I was some huge beached killer whale. There was another anesthesiologist who started numbing me even more. He took a needle and was poking me around my body asking me if I could feel the poke… Nope. I was numb all the way up to my chest, although my arms were still shaking uncontrollably (apparently the anesthesia can do that). Greg reappears and sits by my side. The anesthesiologist lets him know when he should stand up to take a picture of the baby. I hear weird noises and I try not to imagine what they could possibly be doing down there, although I know exactly what they’re doing.

I feel some pressure. Oh dear goodness, some intense pressure. We later learned that the poor baby was so stuck in my pelvis, the doctor had to pretty much get on top of me and yank her out. Oh, and her head just so happens to be ridiculously huge (still is). She also later tells me that I am one heck of a pusher because she was so stuck (hey, at least I know I’m in shape). I knew I pushed right! Anyway, I hear more noises. Then the anesthesiologist tells Greg, “Here it is! Get the camera out and take a picture!” Which he does. The picture came out really blurry/bright and my guts are in it, so I’m not sure you’d like to see that.

I hear more noises and shuffling and finally… my baby’s cry. It’s a cute cry. Not really a screaming cry. For some reason, I knew her cry would sound like that. I recognized her. Unfortunately, I didn’t get to see her right as they pulled her out. Greg is with her while they clean her, weigh and measure her and what not.

Finally he brings her over to me. I am still shaking uncontrollably so I can’t even hold her. I take one look at her face and I feel like I’ve known her forever. I feel so bad, though, because her eye is swollen and she looks a little beat up from all of that effective pushing. Why did I beat her up like that? Poor thing! 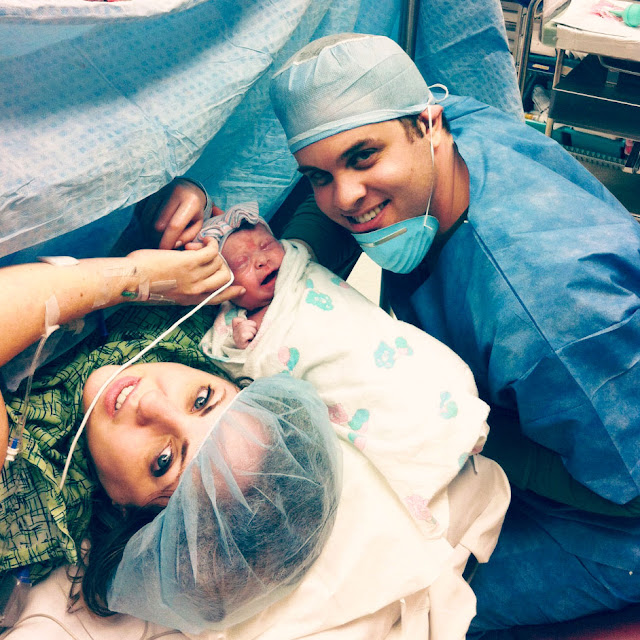 We sing “Happy Birthday” to her and just soak in the precious miracle that was brought to us. We comment that she has mommy’s eyes and daddy’s nose. We made this little girl! It only must have been about five minutes we got to spend there together, but it felt like time stood still. 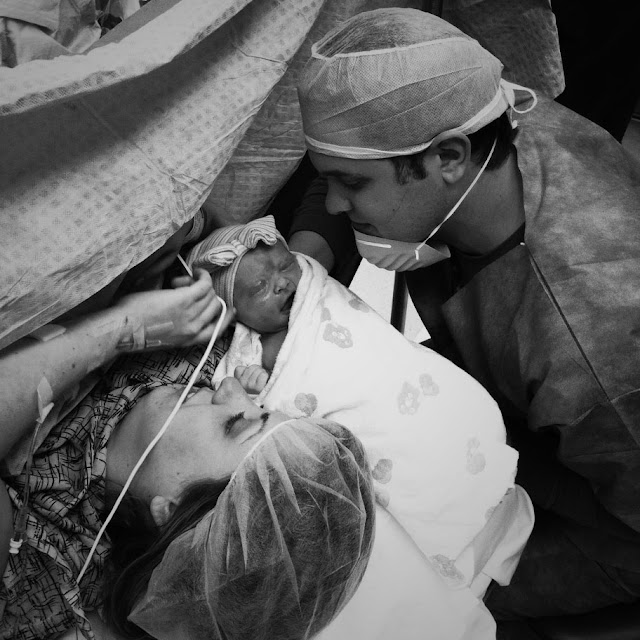