You are here: Home / Travel / Our European Adventure: 2 Days in Salzburg, 1 Day in Munich
103shares

I can’t believe it’s already been over two weeks since we began our European adventure. I’m sure if you follow me on social media, you know my husband and I went on a two week kid free vacation to Salzburg, Munich, Rome, the English countryside, London, and Montreal on the way home. It was Greg’s first trip across the pond, and it was my fourth. 5 countries, 6 plane rides, and 3 train rides later, I’m here to tell the tale. Ha.

It was amazing, and the trip of a lifetime. We celebrated Greg obtaining his master’s degree and both of our career switches. Since it was his first trip abroad, Greg got to pick the places we went (for the most part). He did such a great job coordinating everything!

For those of you that follow me on Snapchat, you got to see a lot of the entire vacation. I loved snapping for you guys, and many of y’all told me you enjoyed watching.

But, alas, we are home and back to the harsh reality of life. Why can’t I wake up every morning to the sound of church bells in the distance with a hot breakfast waiting for me among the hills of Salzburg? I suppose reliving our times during this recap will do. I plan to recap each leg of our trip in different posts, so it’s not too long.

Let’s start with Salzburg and Munich.

Salzburg. Oh, Salzburg. What can I say? It’s my new favorite European city. I really had no expectations for Salzburg, other than the fact that it’s where the Sound of Music was filmed and where Mozart was born. Let’s just say, this place is magical and everyone needs to put this city on their travel bucket list. Even if you aren’t a Sound of Music fan. Just trust me.

Our Salzburg stay probably wouldn’t be as magical if we didn’t stay at the Hotel Schloss Monchstein. It is rated the #1 hotel in Salzburg on TripAdvisor, and I have to stay it was one of the most memorable hotel stays of my life. It is in an old castle on a hill overlooking the city of Salzburg. There are only 20-something rooms in the whole hotel. They upgraded us to a suite and we had almost 360 views of the city, and the property. The staff was attentive, the breakfast was amazing, and we felt important our entire stay.

The first day there, we walked the 10 minute walk into the city (it’s an elevator ride down the hill and across a bridge – very small city) and did some exploring. The great part about Salzburg is that you really don’t need transportation. It’s small enough to walk and see a lot.

We went to the Augustiner Brustrubl, which is Salzburg’s best beer hall / garden. It’s in a building that used to be a monestary, with a garden on the outside. Really cool place. You go and buy food from local vendors and then get some tokens and they fill your beer stein. It was awesome. The weather was perfect in the garden.

We were pretty exhausted from our travel, but we continued to walk around the town for more sightseeing. We called it an early night.

Our hotel arranged our Sound of Music tour for the next morning, and someone from the tour actually came up the hill where our hotel is to pick us up. It was a really nice touch.

I told Greg that if we went to Salzburg, I absolutely had to go on the Sound of Music tour. It was one of those life long bucket list items I needed to cross off. It’s my favorite movie of all time, and was one of the movies that really sparked my love for musical theatre.

The tour did not disappoint. Even if you aren’t a big fan of the movie (it’s not that Greg doesn’t like it, he just never has seen it from start to finish), it is a great tour to see the city and some gorgeous sights. They take you out of the city, as well. You get a good look of those famous hills, and also beautiful views of Austria’s lakes region. It was absolutely stunning. Greg enjoyed the tour far more than he thought he would!

The Mirabell Gardens is such a gorgeous spot in Salzburg. They filmed lots of “Do Re Mi” here, and it’s just so picturesque.

After the tour, we walked around the city some more.

That evening, we went over to the Salzburg Fortress for dinner and a concert. A string quartet performed selections from Strauss, Mozart, Vivaldi, and more I can’t remember off the top of my head. I didn’t get any pictures of the concert (my camera battery died after we arrived to the fortress), but it was so amazing. Amazing to think we were hearing world class musicians on top of a hill in Mozart’s birthplace.

The fortress is on the highest hill overlooking the city, and it had quite breathtaking views at sunset.

It was a quick stay in Salzburg. I told Greg this was going to be hard to top, and I’m pretty sure nothing else did. (Don’t get me wrong, the rest of our trip was incredible, but something about Salzburg is magical and fairy tale like.)

The next morning we took a 1.5 hour train ride out to Munich, Germany. We arrived in the center of town, in the Marienplatz, and walked over to our hotel. We stayed at the Louis Hotel. It was a modern, small hotel in the middle of the action. We liked it, aside from the fact that our AC wasn’t working properly. Staff was nice about it, though, and brought us fans and charged us less for the inconvenience. That was really nice of them.

We only had one day in Munich, so we spent our time walking around, sightseeing (we stayed right in the center so there was a lot to see), and beer. Our first beer stop was at Hofbrauhaus, one of the most famous beer halls in the world.

We ordered the Rußn, which is half beer half lemonade, and a big ol’ pretzel. That was a really fun beer hall! We explored the city some more (I don’t know why – I don’t have tons of pics from my camera from Munich). Then we ate at a restaurant where the menu was entirely in German and you sat where they put you – so we were sat with some lovely British people. I asked the waiter what his favorite was and he brought it and it was delicious. Haha!

There was a big soccer game that night (Germany v. France… France won) so everyone was out in their Germany jerseys. It was fun to watch the soccer culture.

That really brings us to the end of Salzburg and Munich. If you made it this far, you’re a cool person. We did a lot in 3 days. Up next: Rome! 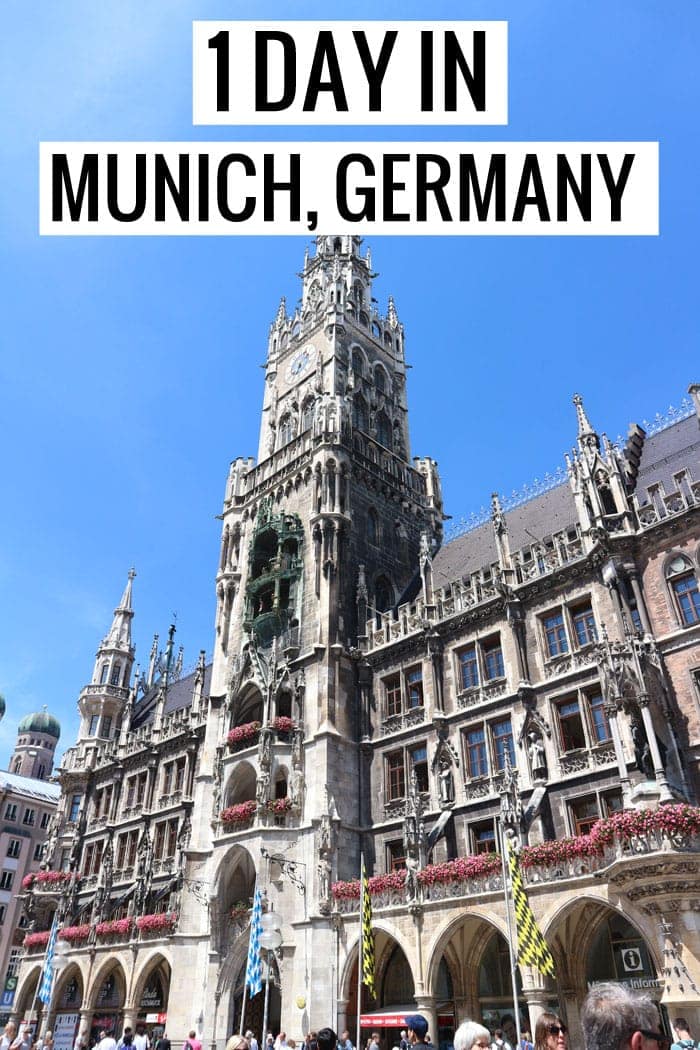 What’s in My Travel Makeup Bag

Too much fun in the sun ☀️

After 5 months of staying home, it feels AMAZING t

Give me a double tap of Facebook ads suck you in.

Let's chat all things drugstore! Go check out my l

Here’s the story of a lovely lady.... plus all h