You are here: Home / Food/Recipes / I made sopapillas!

Greg and I had a low-key anniversary, as it landed on a Monday. We be celebratin’ tonight! He’s taking me to the place where we had our wedding reception (an amazing Italian restaurant, in case you were wondering).

So, even though the actual anniversary was low-key, he grilled fajitas and I wanted to be in charge of dessert (being preggo with lil Baby O gives me even more of a sweet tooth). I wanted to make cheesecake, but he jokingly suggested sopapillas and started walking down the grocery aisle saying “SO-pa-PEE-yas!” in a high-pitched weird voice.

Then I thought about it… and it sounded delish. It could be my crazy craving, but I wanted to make it.

Have you non-Texans (I say that like it’s a curse… ha) ever heard of this or had them before? I know it’s a Tex-Mex thing.

I will admit, I wasn’t super hardcore about the sopapillas, as I didn’t make the dough myself. I know the sopapilla purists are probably cringing as they read this. Well, my way was actually really easy, and paired with a bowl of vanilla ice cream, it was heaven. 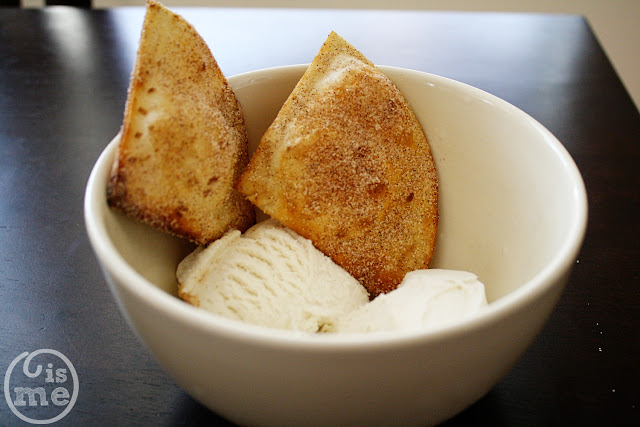 Here’s what I did:
– Quartered some flour tortillas
– Heated some vegetable oil in a skillet
– Fried those babies up
– Rolled them around in a cinnamon/sugar mixture
– Ate them with vanilla ice cream

Here’s what I regret:
– Not smothering it in honey. I even have some in the pantry. Silly Meg.