Today, Kennedy has been out-of-utero longer than she has been in (well, maybe not technically, but humor me). She is nine months old! It is amazing how quickly the time flies and how amazing my beautiful daughter is.  And since football season started up, why not sport her home town team? Go Texans! 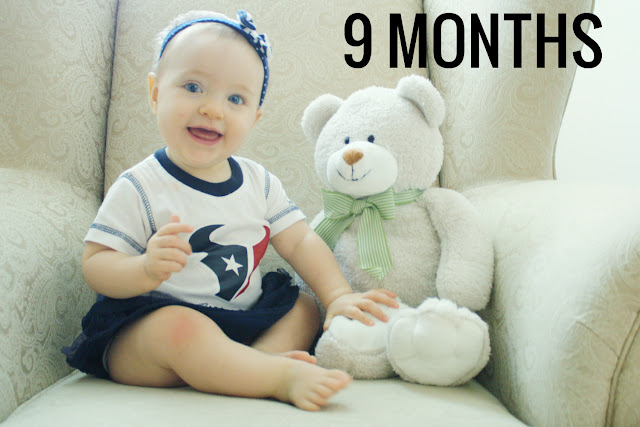 KENNEDY LATELY:
– This month has been a month full of milestones! Kennedy is a busy, busy girl with a lot of growing up to do (much to my chagrin).
– She now has four bottom teeth and four top teeth! Kennedy has been an incredible teether, without really losing sleep or putting up much of a fuss. She just really chews on her hand a lot.
– Kennedy got baptized over Labor Day weekend, which was a wonderful day for our family and friends. We had some close friends come into town from New York to be Kennedy’s God parents, and other close friends from out of town came in for it, which was amazing for them to do and we were so happy to spend time with them.
– Kennedy started crawling literally days after all of our company left.
– A week later she could pull herself to standing.
– Kennedy loves her school, friends and her teachers. She does so well and is very happy. Every time I come to pick her up, she is on the floor playing with her friends and doing plenty of exploring. I have never seen her in a bouncer or exersaucer. They focus a lot on developmental milestones. I mean, she did start crawling after 3 weeks of being in attendance. The church totally doesn’t give off the daycare vibe, and I think it’s fun to tell people Kennedy goes to “Catholic School.”
– Kennedy has been coming back up to my school with me for rehearsal. I have a couple of students who are in charge of watching her while I lead play rehearsal, and she has been very good so far. I have been able to get my work done but it’s also nice to have her with me so I don’t feel like I’ve missed out on any time with her.
– Her new thing to do now is say “Uh oh.” She doesn’t really know what she is saying, but gosh it’s cute. She has babbled “dada” and “mama” indiscriminately but I really feel like “Uh oh” has been her first word that she figured out how to put together and say. How funny is that? I don’t think it’s technically her first word because she doesn’t know what she’s saying, but it’s hilarious nonetheless.

🎃HAPPY HALLOWEEN🎃 from our Olaf, Mal, and Ca