On Saturday, Miss Kennedy turned eleven months! Can we even believe this is the last month of her infancy? And once she reaches a year, she’s a toddler? I can’t even handle this. Can’t. Even. 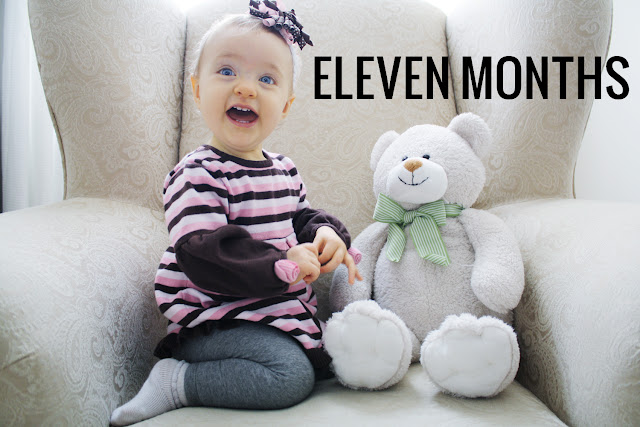 KENNEDY LATELY:
– She still has her eight teeth and is more into eating new foods! She will try just about anything. This one is certainly not a picky eater. At all.
– Kennedy eats three full meals and nurses about four times a day. She’s a big girl.
– Miss thing is certainly all over the place, crawling everywhere and getting into everything. She has a little walker toy and she loves walking with that! She hasn’t started walking on her own, but I think we’re close.
– I am pretty sure Kennedy’s first word was “Dexter.” She points to him and says “deh-ta!” I thought it was a fluke because she says “dadadadada” all the time, but I specifically heard a “T” in there. Go figure, my child’s first word is the cat’s name. Haha!
– She will also now point to Greg and say “Dada.” We are still trying to teach her “Mama.”
– If you ask Kennedy “Where’s Dexter?” She will look around the room and then points to him and says “Deh-ta!” when she sees him. She basically is obsessed with Dexter.
– Kennedy is beginning to understand “NO.” She doesn’t necessarily pay attention to it 100% of the time, but if you keep repeating it to her, she will get the picture. This includes grabbing the remotes or trying to turn off the cable box. I will tell her “No” before she gets to it and then puts her hand down. She will then whine because she knows she’s not allowed to touch it, and then I will redirect her to something else, like a fun toy or Dexter. I think it’s important to set boundaries for her but at the same time redirect her to something else she can do instead.
– She is a great sleeper still, going down between 6-8 p.m. and sleeping until 6:30-7:30 the next morning. She also takes two naps most days (at least one).
– Kennedy loves being a little parrot. She will repeat babble or noises that you do. It’s so cute!
– This kid LOVES anything Mickey or Minnie Mouse. Hence her Halloween costume and her first birthday party theme!!
– On that note, I cannot believe I am already planning her party. The invites went out this week. Seriously. I can’t handle this.

A MODELING PICTURE:
HOW SHE’S GROWN:

[ad] This holiday season, it’s so important to t