You are here: Home / Events & Parties / My Sister’s Wedding
3shares

A few weeks ago, my little sister got married. It was an amazing event and every single person had a great time. I just had to share the pictures with you all. It was also awesome because one of my best friends and her husband were the photographers for the wedding. They did an incredible job! So thank you, John and Anne from W. Studios! I’ll just let the pictures do the talking. In case you were wondering, the wedding was at the Bell Tower on 34th in the Heights.

Me and my little sister! Yes, we have been told lots that we look like twins, but I am four years older.

I also want to give a shout out to Artee from Blush and Glow who did my makeup, and my sister’s hair and makeup for the wedding. Her and Anita are just incredible makeup and hair artists in Houston, and if you need anyone for that, you must use Blush and Glow. I’m not saying this because she did my makeup for free, because I would (and did) gladly pay her any time to do it! Her and Anita also did hair and makeup for my wedding and Artee has done my sister’s hair and makeup multiple times when she would audition for the Houston Texans Cheerleaders. Artee also has a blog at Artista Loves Art. She is so sweet, incredibly talented, and she has the most precious baby girl! It was so nice to have someone else do my makeup for once! Especially since I am usually the makeup artist. We went for a gunmetal smoky look for my eyes, dramatic lashes and a nude lip. My sister’s look is very bridal and fresh, while also having a bit of boudoir look to the eyes. We couldn’t have been happier with the looks! I, however, was Kennedy’s hair stylist. The best way to get her to sit still is give her a bag of Goldfish.

I love these pictures of my brother walking my mom down the aisle, my new brother-in-law (Fred) walking with his parents, and my dad walking my sister down the aisle. Such special photos. I liked how both of our families were incorporated into the wedding ceremony as much as possible. It was very sweet.

And we can’t forget our little flower girl! Kennedy was complaining and making a bunch of noise while we were waiting to walk down the aisle (we got to walk together because I was the maid of honor). She just wanted me to let her down so she could run! We had practiced it a bunch the day before so she knew what to do. As soon as I put her down, she took off scream-laughing. I love the picture of my family all smiling at her as she runs down. She also ran so fast, she climbed the stairs up to her uncle Fred (where she didn’t need to be, haha). I quickly picked her up and gave her to her grandma.

I just love the black and white picture of my dad and sister walking down the aisle. My sister was supposed to borrow my veil that I wore for my wedding. We were so busy getting ready and doing other things, we completely forgot to put her veil on! I didn’t realize it until she had already walked down the aisle and I saw the back of her dress. Honestly, though, I think it ended up looking beautiful without. She had a glamorous headband, and I think it was just enough! The ceremony was very beautiful and romantic. I just love the candles lining the aisles. The venue was just, overall, super romantic, and just gorgeous. Candles everywhere.

Just a few of the portraits that were taken. Over on the left is my brother and sister and mom. I think the picture of the bridesmaids is really funny because of how Kennedy is running away from us. And then I like the big group picture of both families. Not pictured: the staff at the venue started bringing us champagne and adult beverages as we took our portraits. Genius!!!

The reception was a blast! Great food, good dancing, and they even had some fake gambling for those that weren’t into the whole dancing thing. It was awesome because a lot of people really had a lot of fun with that. I definitely played some black jack and lost $2,000 in fake money. I don’t do much better in Las Vegas.

Thank you, Christine and Federico, for having me (and my little family) be a part of your special day! We love you! 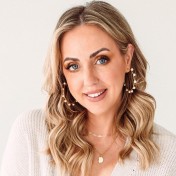 My blog is is my happy place to empower busy women and moms to always look and feel fabulous! Sharing my best beauty advice, stories on motherhood, fun videos, and favorite experiences. My motto: find time for fabulous!

Subscribe and get blog posts straight to your inbox!

This error message is only visible to WordPress admins


Error: API requests are being delayed for this account. New posts will not be retrieved.

Make sure this account has posts available on instagram.com.