Today Kennedy is ten months old! Can we just stop for a moment and take a collective cry because my baby is now in the double digits?! 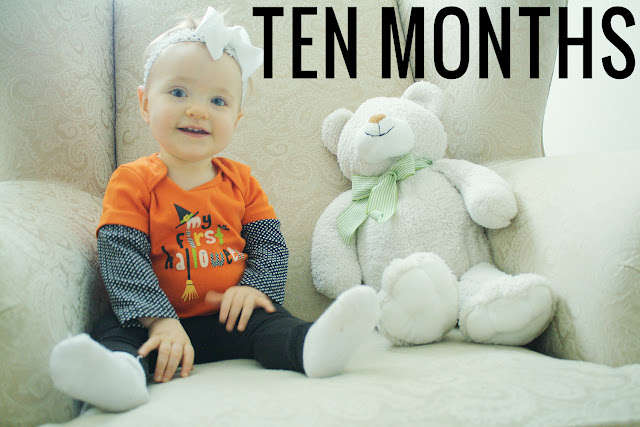 KENNEDY LATELY:
– Miss thing is growing more and more of a personality. She is always letting you know exactly how she feels. She can be so silly at times, and other times she is just so serious.
– Kennedy has eight teeth! Don’t you love that toothy smile? I think she’s about to cut more teeth.
– She now crawls faster than ever and is pulling herself up on everything.
– And on that note, she just started “cruising” – she will pull herself up and then walk around while holding onto furniture. Hold me.
– She has started waving a lot. It is pretty much the cutest thing in the world.
– Kennedy is now eating three meals of solids – breakfast, lunch, and dinner. She also nurses or drinks her milk in a sippy cup (when she’s at school) during the day. She loves water. She will also try any food that you give her. She really isn’t a picky eater at all!
– I have been taking Kennedy to rehearsal with me and then Greg picks her up from me after about an hour or two. She does great with the kids, but she gets very tired.
– Kennedy is so social and loves loves loves her teachers and the other babies in her class.
– Lately, because of her long day, she has been going to bed before 7:00 and sleeps until we wake her up in the morning around 6:30! She is such a good sleeper.
– Kennedy is pretty much the best baby ever. 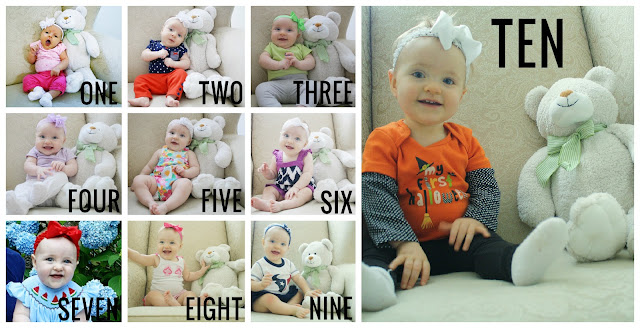 I think today calls for a #howitstartedvshowitsgoi

While I’m confident and comfortable in my own sk

So happy this one is back to feeling better! He ha

Well, I think I’m Prime Day’ed out! So many de

My baby is growing so much 😭 and it’s hard to

"If you stand for nothing, what will you fall for?