Today little Miss Kennedy is 3 months old! She is appropriately celebrating her 3 month birthday with a little green for St. Patty’s Day. I guess her bear got the memo, too. 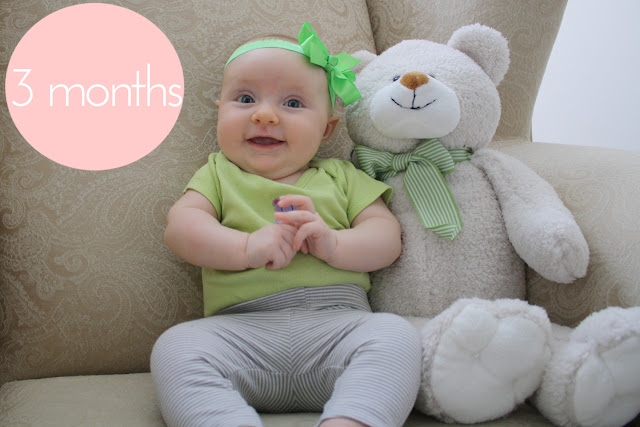 This Month:
– Kennedy is becoming more and more talkative. She smiles so much and tries to be a part of the conversation.
– This little one never wants to be put down. She always wants to be held and a part of what’s going on. I am working on getting her to be able to play by herself or be in the swing alone, but everyone keeps telling me to soak this moment up and not worry about it (and it’s impossible to spoil her at this age). I mean, yeah, it would be nice to take a shower or get a few things done around the house, but I do love holding my baby. I don’t really mind it. I just bought her a little activity mat/gym to stimulate her motor skills so I hope it works out to where she can play on that when she is away from me during the day and her babysitter needs to tend to her own needs!
– She is reaching more for objects and discovering her hands more.
– She is also chewing on her hands and drooling quite a bit, which makes me think that teething isn’t that far in the future for her.
– She has having less trouble taking a bottle with expressed milk and was so great during the day while I was at work!
– I have only been back at work for two days and then I had the entire spring break off. I am enjoying being with her again this week but it has gone by way too fast!
– She is still a great sleeper, although she started waking once in the middle of the night ever since I started back at work. Apparently change messes with babies’ schedules but I hear she’ll get used to it.
– Speaking of sleeping, she is not much of a napper. I have been trying so hard to get her on a napping schedule because by the end of the night I know she is just overtired and is super cranky as a result of it. Any napping tips? Please throw them my way! I am hoping she can take at least one long nap when I am at work and then another in the late afternoon.
– Kennedy went through this phase where I was the only one who can calm her down, and sometimes she is still the same way when she is overtired and hungry. Poor Greg thought his daughter hated him. Again, another phase.
– She is still gaining lots of weight! I can’t wait to see what she weighs at her check up next month.
– Kennedy is still wearing 3 months clothes, but can fit into some 6 month clothes. Granted they are a bit big on her.
– I love this little girl so much and she is getting more and more of a personality each day. I hate leaving her but it makes the end of the day so much brighter!

Let’s take a look at how Kennedy has grown! 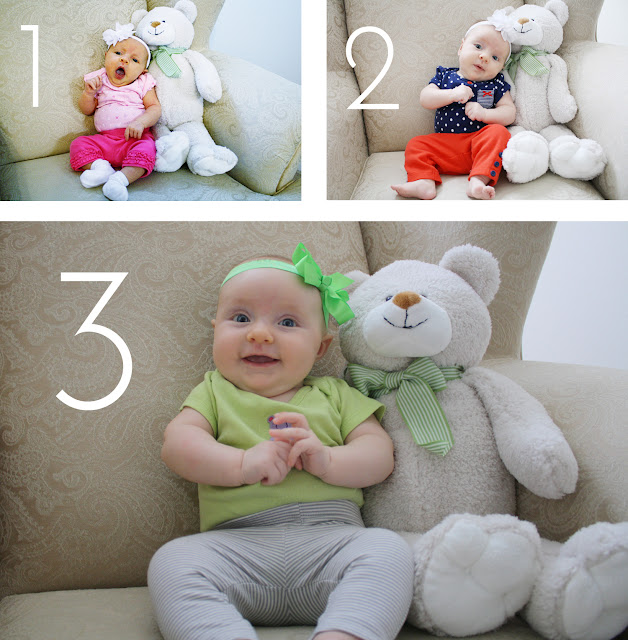 What a little angel, I must say! Hope y’all are having a great weekend and Happy St. Patty’s Day!

This eye and lip look is pumpkin spice and everyth