So, I have been meaning to write this post for, oh…. 2 months. I guess summer kind of got in the way of that! Better late than never, right?

I always find it really helpful when others share their favorite items for their babies, so I figured I would do some posts on my darling girl’s favorite things. First of all, I can’t get over how much crap babies need. It’s mind boggling. There is so much research to be done and registering to do when you’re pregnant. Having the right things can really help, though.

Kennedy has been a pretty low-maintenance baby for the most part, especially as a newborn, so there hasn’t really been much that she absolutely needed. But there has definitely been some things I received as gifts. I wanted to share with you guys some of the things that she enjoyed from birth to six months. 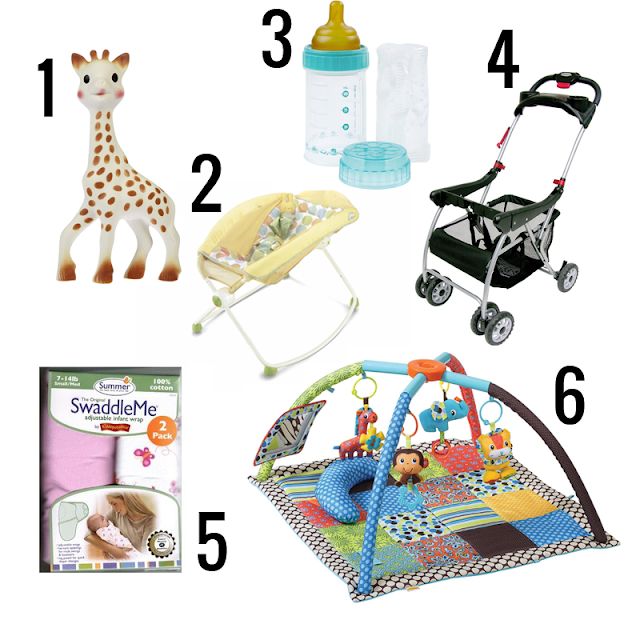 1. Sophie: This is such a fun toy. Yes, it is expensive, so that’s why you get it as a gift, of course! Katie got this for Kennedy. It really has helped Kennedy explore chewing. She didn’t start teething until after seven months, but she started chewing on her fists and fingers from about 3 months on. She never took a pacifier, but has really loved chewing on this. And it also helps that the toy is completely chemical and BPA free!

2. Fisher Price Rock ‘n Play Sleeper: Kennedy basically lived in this thing as a newborn. Since newborns sleep quite a bit, it was very convenient to have her in this because it is so portable. I literally have drug this around the house with her in it while I did chores. When she was really little, I would have her in it in the bathroom with me as I showered. I turned the music up and she just loved hanging out listening to music while I actually got to clean up. She got too big for this around 5 months, which by that point, her feet were literally hanging off the edge.

3. Playtex Drop Ins Bottles (with latex nipple): Transitioning Kennedy to the bottle provided to be a bit of a difficult task. She preferred her mommy to anyone else, but that wasn’t an option for her when I went back to work ten weeks later (although having mommy’s milk was definitely an option). I did a lot of research as to which bottles to transition her to and a lot of people said that they swore by the drop ins with the brown latex nipple. When you see these in stores nowadays, they come with the clear plastic silicone nipples, so you have to buy extra to get the latex. Sometimes they’re hard to find. I haven’t found them at Target, but they seem to be at Babies ‘R Us and random grocery stores. Anyway, Kennedy ended up doing really well with these when she transitioned. I think the first week was the hardest for her, but it ended up going smoothly thereafter. I can most definitely do a post on my breastfeeding essentials because I have successfully been able to keep her exclusively breastfed while also working.

4. Snap ‘n Go: When we were looking at what to get as far as strollers go, we decided not to go with a travel system. We wanted something light but still sturdy. I 100% recommend the Snap ‘n Go stroller, and I am so happy that we decided to not go with a travel system. Kennedy’s Graco carseat snaps in easily (and it is compatible with most infant car seats), and the stroller folds up so quickly. We have flown on 6 airplane rides with this and her carseat, and it has been so easy to travel with. We also have a Chicco Liteway that we use, and will come in handy once she outgrows her infant car seat.

5. Summer SwaddleMe Blankets: Kennedy was one of those babies who just loved to be swaddled. Unfortunately, she would always break out of her swaddle from regular receiving blankets. I totally forgot we had these and when we started using them, she slept so much more peacefully. They are so easy to use and really are sturdy. We actually swaddled Kennedy until she was about 4 months old. She easily weaned from them. We took one arm out for a couple of nights, the other arm out, and then moved her to footie pajamas or a sleep sack.

6. Infantino Twist and Fold Gym: I really think that having an activity mat encourages babies to enjoy tummy time and rolling over. As soon as we started to put Kennedy on hers, she loved playing and rolled not too much after. I chose this activity mat because it was priced really well and it also easily folds up and stores. I know there are a plethora of activity mats to choose from, and I think a lot of them are alike. I got the “boy” one because I thought the colors were more stimulating for infants, and I would like to be able to reuse it when Kennedy eventually gets a sibling.

Mommies, what do/did your babies love at this age? I love hearing your recommendations!

[ad] This holiday season, it’s so important to t